With FisherPoets Gathering just around the corner, Imogen Gallery is pleased to be hosting Fish Work:  The Archives, an exhibition by professional artist/fisherman, Corey Arnold of Portland, Oregon.  This will be Arnold’s fourth exhibition at Imogen, held in conjunction with the 2020 FisherPoets Gathering. The Gathering, an annual celebration of the fishing community offers a glimpse into a very specific industry through stories and poetry written and recited by fisher folk. The exhibition opens February 8th for the Astoria Second Saturday Artwalk with a reception from 5 – 8 pm. The exhibition will remain on display through March 10th.

Corey Arnold began fishing as a child, about the same time he first picked up a camera. What began as weekend adventures with the family quickly became a permanent part of life, culminating into a successful dual career, one mutually supporting the other. This exhibition will include mostly work that has never been seen; a strong collection of photographs taken over the past 20 years that spans oceans and continents. Arnold began fishing commercially in 1995 as a deckhand aboard various vessels and skiffs in Alaska. His career as a fine art photographer and fisherman has taken him far, both documenting and fishing the world’s oceans. Despite his international success as a photographer, Arnold returns every summer to Bristol Bay, Alaska, where he captains a skiff, fishing for salmon.
Arnold’s work is without doubt a celebration of the lifestyle of the fisherman.  He also hopes to convey a broader message, raising awareness to the challenges that coastal communities and our oceans, are facing in the 21st century. Through his lens he captures the raw and rugged reality of hard work, with brutal and honest images that depict both danger and beauty, sometimes in the same moment. Corey is not one however to overly romanticize, he is critically aware of the struggle of a rapidly changing global fishing industry.

Regardless of present obstacles and demands on a struggling industry, Arnold states:  “Although it’s important to be aware of the challenges facing those who work at sea, the most essential message of all comes from the spirit of this way of life. Whether we are landlocked in the mountains, or out on a boat at sea, the hard work, passion, blood and guts of this profession speak to a vitality that I hope will inspire the viewer on his/her own personal journey.”

Arnold’s fine art photographic work runs deeper then capturing a lifestyle, he tackles environmental issues, food production and man’s complex relationship to the natural world, all on a global level. With a keen eye for composition, Arnold brings imagery that narrates the reality of contemporary culture from a perspective he knows best. About this series he states:

Fish-Work is an ongoing series that explores life aboard commercial fishing boats around the world. This selection includes work from my experience at sea aboard pollock and factory trawlers in the Bering Sea, a multi-month tour of European fisheries, images from my seven years working on the deck of the Bering Sea crabber F/V Rollo, and Graveyard Point, the seasonal salmon fishing community in Bristol Bay, Alaska, where I captain a skiff every summer.

While the photographs celebrate the lifestyle of fishermen, it is also my intention to bring awareness to the 21st century challenges facing coastal communities and oceans alike. The global fishing industry is in a period of rapid change. Serious threats to small-scale fishing communities include fleet consolidation due to catch shares, poorly managed fisheries abroad, ocean acidification, fish farming, and watershed destruction due to urban development, mining and pollution. Closest to home for me is the proposed Pebble Mine in the headwaters of Bristol Bay, Alaska. Backed by billions of dollars of foreign corporate investment, the Pebble Mine could be one of the largest open-pit copper mines in the world placed in the richest sockeye salmon watershed on earth.

Arnold, who graduated from the University of Art Academy in San Francisco has enjoyed a diverse and exciting career. His ongoing series Fish-Work was launched after receiving a commission from the PEW Charitable Foundation, taking him to Europe and photographing from aboard fishing vessels in eight European countries. He has also been awarded an American Scandinavian Foundation grant which lead to the documentation of the work of fishermen in Northern Norway.  His work has been exhibited in Portland, San Francisco, Los Angeles, Chicago and New York as well as numerous other venues worldwide, and published in Harpers, The New Yorker, New York Times LENS, Art Ltd, Rolling Stone, Time, Outside, National Geographic, Mare and The Paris Review among others. He is a recent recipient of a Hallie Ford Foundation Fellowship, a National Geographic Explorer Storytelling Grant and the first place award winner for the nature category of the World Press Review’s annual photography competition. Arnold has published two books of photography by Nazraeli Press including Fish-Work: The Bering Sea, and Fishing with My Dad. He is represented by Charles A. Hartman Fine Art in Portland, Oregon. 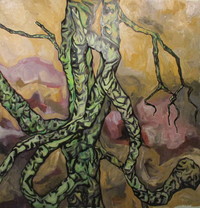 Local favorite and internationally acclaimed outsider artist Roger Hayes returns to Imogen for his fourth solo exhibition. This series Hayes turns his focus to the mythos of the great Pacific Northwest trees of the coastal region. Painting primarily in acrylic, he brings a collection of abstract and representational paintings considering physical attributes as well as metaphoric content through the totemic connection to land and sky. Pacific Northwest Trees opens during Astoria’s Second Saturday Artwalk, January 11, with a reception for the artist 5 – 8 pm. The show will be on display through February 4th.

Building on the theme of his last solo exhibition at Imogen, Roger Hayes forays deeper into the forests of the coastal range. He brings large scale acrylic and oil paintings focusing on the strength, beauty and symbiotic connectivity between trees, bridging earth and atmosphere. His interest stems from the obvious of environmental concerns but also crossing into the deeper connection of metaphysics and social structure of these towering giants.  About this current series he states:

Trees define the Northwest environment and create boundaries that ripple for miles, joining environments that surpass our districts through a natural order.

There is some risk of even cueing into a trendy point of focus with this topic, as we scramble to find solutions to stabilize a rapidly changing environment.

It is hard not to think of a tree as a neural connection between the sky and the earth, with cell like dendrites extending into the sky, and axons terminating in the earth. It strengthens the image of trees as sustaining the exchange of chemical messengers.

My interest in trees may have more to do with expressions of individuality, character and symbolism. Trees, like iconic and archaic animals also reach far back into the human psyche, and are also likely to be highly charged and evocative.

Trees are also linked in complex networks with other organisms, and form colonies.  Yet an image persists of the weather distraught solitary tree on a perch, withstanding millennia of solitude.

I can think of no better expressionist, or primitivist icon than a tree that both calls on the hallowed rites of millennia, or shuns the populace for a lonely and craggy vista.

Hayes, who hails from the gritty streets of Detroit, studied ambiguously the constant evolution of sides of buildings, billboards, and passing trains created by graffiti artists whose only canvas was the city itself. He has enjoyed a colorful and eclectic career as a painter, extending well beyond the diverse art community of Astoria, Oregon, establishing himself early on in his career into what was known as the International Neo-Expressionist movement.  His work has been exhibited extensively throughout the great cities of the Mid-West prior to his inclusion in European exhibitions.  He has participated in exhibitions throughout France, Switzerland, Argentina and many other destinations.